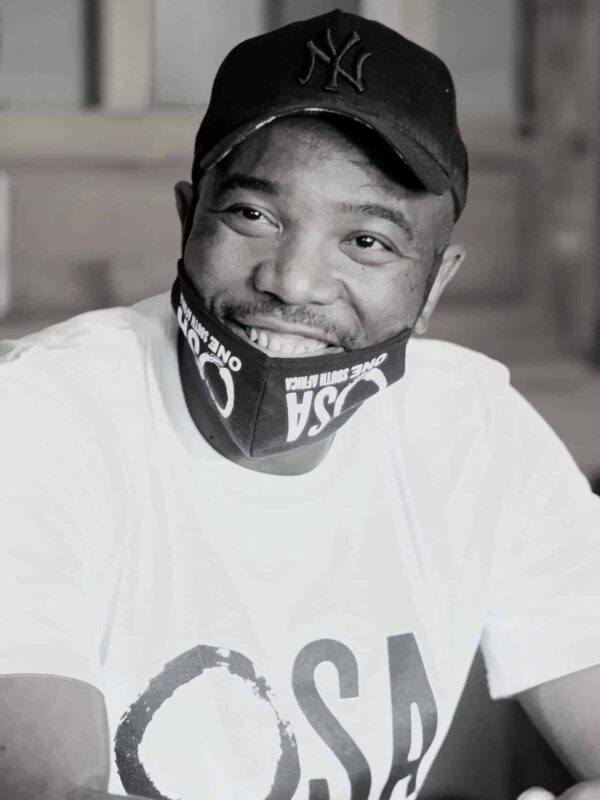 Mmusi Maimane is One South Africa Movement’s (OSA’s) founder and inspirational/courageous Chief Activist. He is both a compassionate leader and a fierce fighter for racial equality and justice.

From an early age, Mmusi has had a passion for championing the rights of the poor and marginalised in society. More recently he has taken up the cause of the silent and betrayed citizens in an increasingly divided South Africa.

It’s this passion that has taken him to the top of politics and now the driving force behind the One South Africa Movement (OSA) whose vision is to create a society in which all men and women regardless of race and background come together and build a society in which they can all live together peacefully and prosper.

Born in 1980, Mmusi grew up in Soweto – South Africa’s largest township. He attended Allen Glen High School, where he matriculated in 1997.

Back then, Thabo Shole-Mashao, his close friend to this day, started school a few days later than the other pupils. The teacher, Sister Christine Obotseng – by all accounts a strict disciplinarian who was feared and loved in equal measure by the entire school – decided to put her Grade 1 class to the test. She instructed the children to write down the numerical figure 1 in their exercise books. Unfortunately, Shole-Mashao did not know how to write. But sitting next to him was another boy who seemed an old hand in what was the new world of reading and writing. The young Shole-Mashao watched in despair as the other boy effortlessly did as the teacher had instructed. He must have looked desperate, because, without uttering a word, the other boy took the exercise book and scribbled the figure for him. On seeing her new pupil’s effort, with the number written as if by a hand that had practiced it many times, Sister Christine became suspicious. Who had done the work for him, she demanded to know. Terrified, Shole-Mashao pointed to the boy sitting next to him, who he would soon come to know as Mmusi Aloysias Maimane.

The ‘kasi’ boy who enjoys soul music, running and boxing is a natural and, from the beginning, has understood the importance of simple acts of kindness.

Mmusi holds two Master’s degrees – in Public Administration as well as Theology, and is working towards his PhD. He speaks 7 South African languages fluently and is aiming on improving this achievement in the coming years.

Through sacrifice, hard work, and a desire to use every opportunity afforded him, Mmusi has built an impressive career in business and has dedicated himself to community work in various ways. He has worked as a business consultant and trainer with a number of local and international companies, as well as lecturing at the GIBS Business Institute. In addition, he is a philanthropist and chairs a number of NGO boards. The foundations he is involved with are primarily focused on HIV/AIDS, and youth and rural development.

A man of faith, Mmusi is an ordained pastor and headed up the Liberty Church
Discovery campus for many years. His lived outreach led him into formal politics where he became a councillor and led the opposition in the Johannesburg City Council for 3 years, fighting for the rights of the poor, excluded and marginalized.

Most recently, Mmusi was the Leader of the Official Opposition in South Africa, a position he held for more than 5 years. During that time he lead the Democratic Alliance (DA) to its best ever electoral performance in 2016. Also during his tenure with the DA, his unrelenting pressure led to the resignation of former ANC President Jacob Zuma. Subsequently, he resigned from his position in the party after losing the fight to transform it from a white to a more inclusive one that is truly inclusive of all South Africans. In Mmusi’s own words, “In the end we’ve come to the conclusion that despite my best efforts, the DA is not the vehicle best suited to take forward the vision of building One South Africa for All”.

Having spent a decade in institutional politics, it’s clear to Mmusi that the political party system is broken and requires urgent changing. Today’s politicians are self-serving and have forgotten about the very people they were appointed to serve. This is why he’s committed to building a grassroots, activist movement that changes the South African political landscape through active citizens who drive change in business, civil society, religious and community formations.

In the 2024 national elections Mmusi will stand as an independent candidate following on the recent Constitutional Court judgement on electoral reform. He will head up the recruitment of a diverse and talented pool of independent candidates to join him in running for election. Imbued with the spirit of Ubuntu, having come of age as a charismatic leader, forged in the fire of opposition politics and displaying an uncanny grace under attack, his time has surely come.

Mmusi is married to Natalie Maimane since 2005 and they have three children.

One South Africa Movement’s mission is historic in that we must bring South Africa into a post-liberation era and a post-Covid-19 world where politics is broken and our economy is at the point of collapse. This means that we recognise the role of the ANC and other liberation movements but also that South Africa must become future focused.

History teaches that removal of liberation movements in Africa takes place through social movements and coalitions. So Kenya, Zimbabwe and Zambia are examples of what happens when parties work together (or don’t) and a consensus is built on a number of values rather than an ideology to achieve change.

South Africa experienced its first wave of change in 1994, through mass mobilization led by the UDF, who were a coalition of political parties, religious bodies and trade unions to mobilize society to bring about the fall of Apartheid.

To date, the One South Africa Movement, has had a soft launch through traditional media platforms and built a network across the continent with parties endorsing the movement – from the IDU (a global association of parties similar to the CDU in Germany, the Conservatives in England and MDC in Zimbabwe).

We are building a pan-African view that seeks to make Africa the biggest story of the next decade. Failure to do so will mean the collapse of the powerhouse of Southern Africa, and the death of 350 million Africans.

We have established provincial councils in all 9 provinces and have offices in Johannesburg and Cape Town.

With the Covid-19 pandemic and subsequent lockdown, we have been deeply involved in the supply of hand sanitizers and food parcels to poor and impoverished communities throughout South Africa. This will continue into the future as the citizens in these communities are without paid work – and losing hope.

At the same time, we are pivoting to the ‘drivers’ of our Movement namely Electoral Reform, Education, the Economy, Justice and Agile and Clean Government. Politics in South Africa is broken. The state of our health and educational infrastructure, for example, is beyond belief and government has let South Africans down.

We can change this with YOUR activism, but we need to change it NOW.

Politics in SA is BROKEN!
One South Africa Movement is about:

To advocate on behalf of citizens, especially the poor and marginalized. To support petitions and/or recommendations from South Africans with respect to particular policies or causes.

To hold politicians and elected local and national officials accountable for their actions. To remove them from office should they fail in their duties.

To hope or strive for something worthwhile. To celebrate other citizen’s or community’s success. To work hard.

To promote, direct, or intervene in social, political, economic, or environmental reform with the desire to make changes in South African society toward the greater good.

To follow peaceful means to bring about social change.

To uphold the needs and rights of citizens to have dignity as enshrined in the constitution. This is a mission to address historical injustices and ensure a future upon which all citizens enjoy justice, equality and shared prosperity.

To adopt a theory of justice that actively addresses inequality borne out of our racial past and to build a society that eliminates discrimination on the basis of race, gender and class. This is to ensure that we build one South Africa for all.

We believe in a just society in which all citizens can live together peacefully and prosper.

We do so by being activists where we campaign on behalf of all citizens and hold government and civic society accountable for their actions.

One South Africa Movement is working to build a society where:

This is our pledge and if we work together locally and across the continent of Africa we can build a future for generations to uphold.

Support a campaign or local event

Gear up for activism

Speak to the right activist