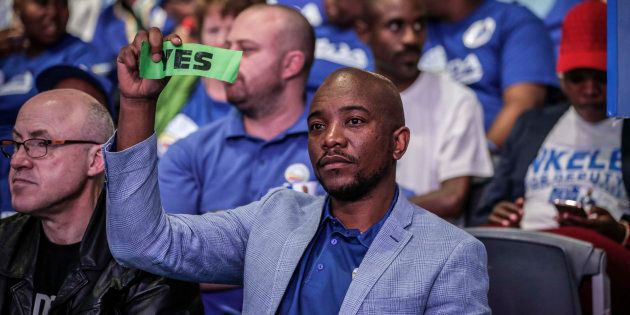 Events in Parliament this past week are an insult to our democracy and the brave souls who sacrificed and fought so selflessly for it. We must seriously undertake introspection with regard to our current electoral system and understanding of democracy.

This week in mid-February serves as one of the busiest in the annual parliamentary calendar, as the National Assembly spends its time rigorously debating the contents of the President’s State of the Nation Address (SONA) delivered just seven days ago. The week is flanked by the President’s SONA some days prior, and the tabling of the national budget the week after by the Finance Minister.

In a country with the highest youth unemployment rate in the world, a broken education system, unabated crime and state institutions rotted by corruption, you would expect the 400 Members of Parliament to focus on workable, cross-party solutions to begin fixing the mess. After all, that is what we the citizens elect public representatives to do — represent us and our interests.

But 26 years after democracy, that is just not the case. And we must seriously undertake introspection with regard to our current electoral system and understanding of democracy.

What has transpired in Parliament over the past days is an insult to our democracy and the brave souls who sacrificed and fought so selflessly for it. Mudslinging, personal insults and ad hominem jibes, and even the trivialisation of gender-based violence were used in a game of party-political point-scoring. South Africa watched in shock and horror. While the country is running out of runway, our public representatives proved that they are out of touch and we remain out of their minds. The central question becomes, on whose behalf are these representatives speaking: the party or the people?

During my time as a Member of Parliament and Leader of the Official Opposition, it often concerned me that Parliament was allowed to degenerate into a narcissistic political soap opera. But as part of the broken system, you quickly become desensitised without immediately realising it.

However, as an ordinary citizen looking from the outside in, I was this week able to juxtapose the agenda of Parliament with the realities facing South Africans each day. This week, two breaking news stories stood out.

The first was on Tuesday where news broke that parents and governing bodies of four overcrowded and under-resourced schools in the Eastern Cape won their case in the Mthatha High Court, with the court ordering the provincial education department to provide “emergency mobile classrooms” within three months.

The second was on Wednesday where news broke that a primary school in Orange Farm, south of Johannesburg, had shut its doors due to health concerns around raw sewage flowing into classrooms. Despite seeking help from the education department, none was forthcoming and the school’s hand was forced. The school has been closed for the past week.

There is nothing unique about these stories. They have become the new norm. They don’t rattle us anymore; they barely break through the noise of our everyday lives. Yet they succinctly tell the tales of two South Africas. One for the elites, and one for the excluded.

At the very same time, our public representatives are playing political theatre, our young children are having their futures stolen away from them. Our democracy has been captured by a small political elite who are out of touch with the real needs of the citizens of this country.

This is why South Africa desperately requires electoral reform. The current strict proportional representation system gives political parties too much power and maintains an ever-growing gap between the public and those in power. It disincentivises nuanced, cross-party problem solving, instead hardening ideological lines in a “winner-takes-all” approach.

In fact, neither a strict proportional representation system nor a pure “first-past-the-post” system is the answer. Rather a hybrid system that offers the best of both worlds ought to be pursued. This system has been touted since the Van Zyl Slabbert report of 2003.

The people’s agenda needs to become the parliamentary agenda. That is why our fight is to ensure citizens can directly elect their public representatives at the local, provincial and national level and in turn hold them directly accountable — starting with amending the Electoral Act.

A mixed system, similar to our current local government elections, shifts power from public representatives to the public. This is so that when an MP speaks in Parliament, the people of their community are represented.

This is the surest way to achieve direct democracy — true rule by the people. DM